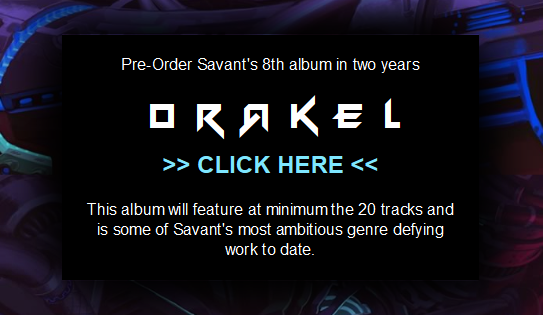 The man, the myth, the legend that is Savant has taken his fertile mind to new depths with the announcement today that his new album ‘Orakel’ will be released this December on Universal. The album has a staggering amount of new music, boasting 20 new tracks from this wildly creative tour de force.

As most already know, Savant is a mind swarming with musical ideas, nearly all of which are memorialized into song. His discography is immense, with over 10,000 tracks to his credit- each one seeming to surpass the last. And this is no small feat since Savant’s repertoire of gene-splicing genres and production prowess is verging on mythological.

With the final leg of his global tour winding down, Savant wanted to be sure his fans were not going to want for new music come December. The fecund talents of this maestro would not rest until he could deliver on his promises and so, Orakel was born.

Written is just under 3 months, the album is an aggressive collection of music that is not for those with a timorous personality or anyone with a weak constitution. In fact, think of Orakel as full on musical combat, totally bombastic, but tempered with a very enlightened edge. Savant, more than anyone, understands that his music can be a catalyst for an EDM renaissance of sorts and he’s peppered Orakel with subtle, and perhaps even subliminal, architecture that will only resonate with those ready to hear it.

So, the question is,…will you join the Renaissance or remain in the Dark Ages?

Orakel is out this December on Universal

You can pre-order Orakel here