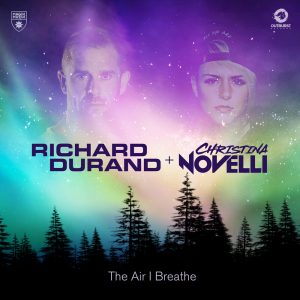 Richard Durand, that masterful DJ, relentless globe-circler and Level 5 caffeine enthusiast, is delighted to present the handshake single for his new long-player. A joint release between Holland’s Magik Muzik and the UK’s Outburst Records, Richard’s ‘The Air I Breathe’ also serves as his striking first time pairing with Ms. Christina Novelli.

If you want a first taste of what the Amsterdamer’s first album in six years will look & sound like, here’s where you’re gonna get it!

From ‘The Air’s outset, Richard sets the most evocative of scenes, carving it deep with rolling bass concentration, echoic & deeper-timbered percussion and quick-release snares bursts. Moving from background to fore, its pads well up and Richard’s synths start their sweep, while Christina’s harmonic refrains begin to establish their presence.

Come the drop, Richard brings all the studio’s spotlights to bear on ‘The Air’s song. Christina burns up the room with a performance that lyrically is as emotionally searching as it is relatable, while its delivery is nothing less than heartrending. Supporting the chorus’ poignancies, one by one Richard reintroduces his production elements, ultimately tying them together to pull off the track’s final altitude-grabbing rapture.